This was an unexpected and unplanned part but definitely one of my favourite sections of the journey to date. Not sure if I’d thought about it too much – that I would have done it. From an elevation of 199 metres to 1488 metres (Highest Township in Oz) and then back down down down again covering over 1000km in 3 days – what a spectacular part of the world!

After stopping off in Melbourne to catch up with the Resicert Crew and Team members I stopped in a Campground called Pine Hill in the Yarra Valley. This was the first spot which I stayed for 2 nights. It was time to do some maintenance, catch up, slow down and relax for a day. Moving home everyday takes a whack of time and energy. The first 2 days stop in a campground with stuff was a welcomed break from the usual.

On Saturday 28th – Day 14 – took off around lunchtime. I had no clear plan of where I was heading was just going to see how it unwound and what got served up. On leaving Karen at the Campgroud suggested I do the Black Spur – winding mountain road – bit tricky but loved by motorbikes – that sounded like a goer. Healesville is a neat town checked – great spot for a bite of Lunch and checked out the Four Pillars – Ginnery – Gin tasting and education – it was packed.

The Black Spur Drive, which passes between Healesville with Narbethong on the Maroondah Highway is famous for its heady scenery of spectacular tall forests. On Waspah it was a joy to take in the sights and the smells of this leg as it winds its way up the Great Dividing Range – it is around 30 km long.

At the other end of this drive wound up in Alexandra for a quick pop in. Sue and her son Zac came over and just loved Waspah. Had a great chat sharing the story and they suggested that is should go through to Bright in Kosciosko National Park – sounded like a plan!. On the way out to  the north  found Reef Hills State Park – just south of Benella – a good spot to free range camp for the night. Good spot – about 6 km of dirt roads to get in and find that spot.Waspah managed it well. It was a full moon so it was bright as day – wandered around the bush just seeing what was out and about at night – what a great setting.

The autumn colours with the maple trees in hues of yellow, red, green and orange spotted the landscape and the road into Bright. I have been very fortunate to date with the weather – no real rain to mention. Today was no exception. Enjoyed wandering through the town before continuing north on the Omeo Highway. What a gorgeous part of the world. Landed at Pigs Point on the Mitta Mitta river as the sun was setting. Set up camp 20 metres from the rivers edge. Another superb campsite!

Decided to continue to head into the Kosciusko National Park and make it the highest township in Australia, Cabramurra. This was a stunning ride into the snowy mountains winding and climbing. The landscape covered with the white timber- very surreal.

What a spectacular part of the world! 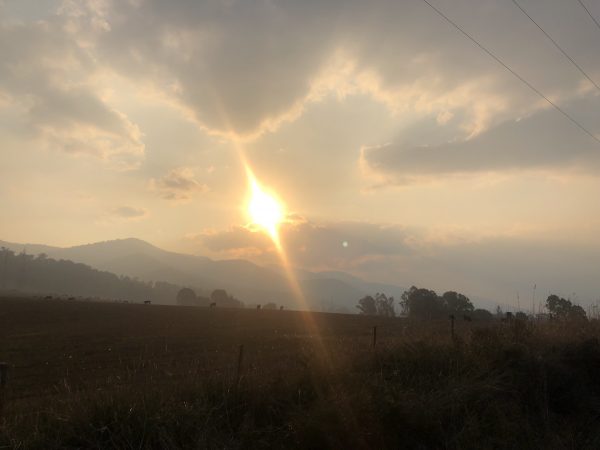 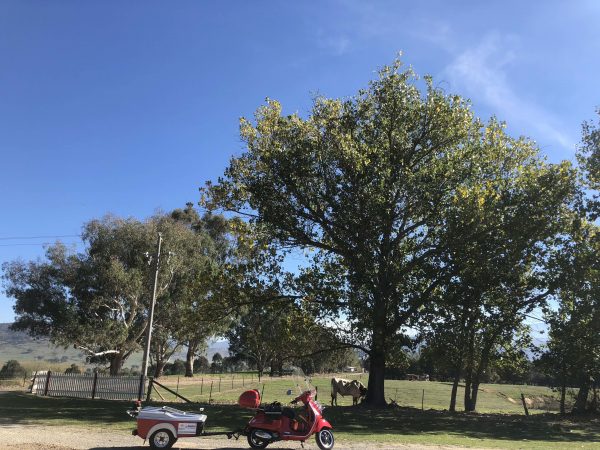