Having camped near the main east-west train line I got to experience the subtle sounds of the rumbling trains at 2am and then again at 4am – only 30 metres away to the east. It was fine even though a bit of shock wake up!

Quick pack up through the 2km dirt track and back on the road heading south to Crystal Brook.  OIn this stretch of highway you will notice the numerous wind turbines spotted on the west along the port edge. There is a reason for that – it is really bloody windy along this stretch. This was the windiest stretch I have rode since the start.It was a westerly cross wind that kept buffeting Waspah around. The passing trucks coming the other way were a treat – huge gusts each time -great work out for the forearms.

It was great to escape the wind and cruise into Adelaide from the North. You always know you have arrived at a city – first traffic light in a long time – felt a bit odd. Always liked Adelaide as a city. Easy and compact. One thing I never noticed in a car was the metal manhole covers all over the roads. A little raised – pleasure when riding a Vespa with the trailer – bounces all over the place.

Pretty much just cruised through. Thought I would just head east onto Handorf and see where I landed for the night – no plan.Not a great idea. Winding hilly roads, bit of rain and getting dark.had to give in in the end and look for a place to stop. Belair national park was luckily nearby and managed to pop into the campground there and set up. Nice spot set in the forest.

Got a visit from a very friendly Bandicoot that was clearly used to hanging with campers. Was a good stop point – woke up to rain tip – tapping on the tent – so decided to hang a bit and get some work done in the camp kitchen. Good catch up with fellow campers from Sydney – Steve and Verity. Man you can solve the worlds problems quickly in a camp kitchen.

Hit the road around Midday and cruised into Strathalbyn just after lunch. Beautiful historic town to get a snack and have a break. Landed in a small free campsite call Frank Pott Reserve just outside Langhorne. Clearly a popular spot – must have been over3 30 vans. Lost of interest in Waspah and the trailer – many conversations and chats.

Camped next to Kevin and Jana – fellow german travellers cruising in a Van. Shared food wine and conversation late into the night. Suggested they head north to Karijini in WA for some warmth and brilliants gorges. Changed plans – going with the flow.

Had over 300 km to cover the next day – so early start. Something beautiful about starting the day on Waspah as the sun rises. Some great scenes heading along the country roads. Into Victoria through Bordertown and onto Horsham and then took the went into the Grampians from the north east along the Zumstein route. What a spectacular and gorgeous ride in. Onto Halls Gap. Once again a popular spot.

Came across a family of Emu’s crossing the road – counted 5 young about midsize. Just wandering and grazing through the bush.Took into some of the sights of the bush before heading out. Was desperate to free range camp tonight so set myself the mission. Took the road out of the Grampians heading to Dunkeld. Lots of roos along this stretch. Found a great spot to camp on the bottom edge of the forest. Got set up and listened to the thud, thud  thud of a Roo nearby who seemed to be circling me. In and out – few grunts.

Back in free range territory -fire and space. Love it! 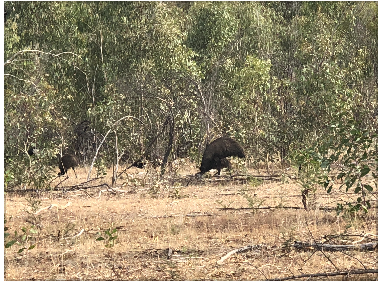