Well what a mad panic to get going – target was to get away by 11 am – was a target – managed to get rolling just after 2pm. Had too much weight in the trailer – max should be 120 kg so have to dump some stuff and move others to the bike.

Had a false start – we had been playing with the Bike – left the key on – of course lights are on all the time so boom battery dies. Made these neat little vespa cavi jumper- (for the non Italians – jumper cables) worked a treat.

Initially had a spot just past Southern Cross – over 400 km. Not possible if i wanted to stop by dusk. Great feeling of ahhhhh – the one you get when you finally hit the road. Seems that I can cruise at around 100 to 110 km/h on the flat – handles nicely.

I continued past dusk. In was quite a surreal feeling heading east as the sun sets over my left shoulder with the shadow of my outline growing longer in front of me. The starts are amazing – I had the Southern Cross accompany on my right for most of the ride at night with the famous pipeline on my left.

On Saturday I met Ross in Mt Helena who came over to the bike for a sticky. He is 87 years old and we chatted for a while. We swapped numbers and he said he would call me to see how I am tracking. It was a welcomed call around 7.30pm as I would doing the last 50km or so.

Rolled into the camp site around 8pm just outside Southern Cross. Getting setting up for the first time takes longer than usual. Had a glass of red to close out the day.

Had a catch up with the friendly neighbours in the camp spot- only the two of us. Sybil and Basil (John) are on a new adventure as they head to Gero from Tassie. Thanks for the coffee and the chat.

Well did a a bit of a re org before I hit the road – aiming to get to Fraser Range around 500km today. 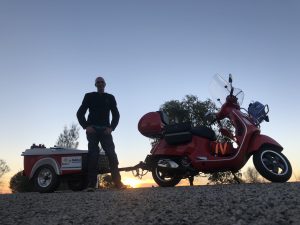 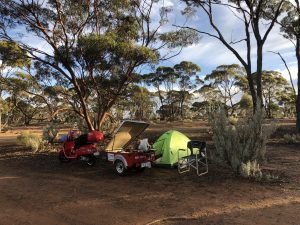